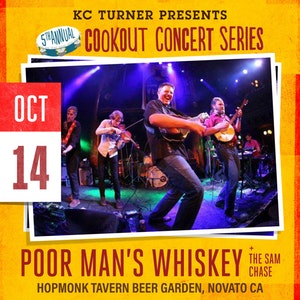 Emerging from the San Francisco bay area music scene this quintet has developed a sound that is eclectic and engaging.

PMW has been winning over national audiences with their upbeat performances, zany stage antics, and infectious songs. While seamlessly integrating acoustic and electric instruments the band weaves tales of everyday life, inviting the audience to become a part of each show.

The Sam Chase has a voice like a Nun on the lam with a mouthful cigarettes and curse words in a lonely bar, drunkenly dancing next to a broken jukebox. His guitar runs on diesel and leaks like the morning after too much Whiskey. His is a show you’ll probably want to tattoo on your body so everyone will know that you knew him before he was cool.

Hailing from the hills of San Francisco, California, Sam and his band whom he lovingly refers to as The Untraditional, take to stages all over the country with a virulent and frenetic passion which many history buffs might liken to the Norse warriors known as The Berserkers, who were known to have fought their battles with an uncontrollable, trance-like fury.  Norse literature notes that they would work themselves into a rage before battle, consuming drugged foods, and dressed in nothing but their enemies blood.   The Sam Chase and The Untraditional do maintain that spirit, but leave the drugged foods and enemies blood up to the discretion of the crowd.