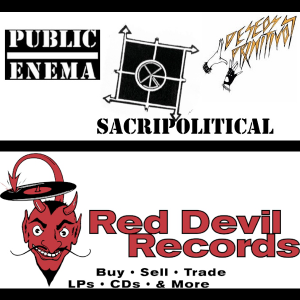 Red Devil Records, at 894 4th Street in downtown San Rafael, is celebrating its 22nd anniversary with a punk rock show at 19 Broadway in Fairfax.

Public Enema is a hardcore punk band that started in the early 1980’s in Berkeley. Members are Dave Ed (also the bassist for Neurosis), Erik Thomas (the ex-drummer for Special Forces), Ryan Sullivan (the ex-guitarist in Samiam), and guitarist North Bay Ray Bini. Vocalist Barry Lazarus is the owner of Red Devil Records in San Rafael. Public Enema was together only a couple years in the 1980’s, playing with well-known, out-of-state and local bands at the famed Ruthie’s Inn in Berkeley. They reformed in 2013 with all original members.

Deseos Primitivos, formed in 2017, is a punk band from the Bay Area (their drummer lives in Los Angeles). They have toured Peru and have plans to tour California and Mexico in March.  They self-released a superb four song 7” and have a full-length album coming soon on Going Underground Records.  Female fronted with lyrics sung in Spanish, they play super-catchy late 70’s style punk with a bit of a gothic rock feel on some songs.

Sacripolitical (1983-1993, 2019-present) is an old-school, hardcore punk rock band. During the 1980’s, Sacripolitical was part of the small but lively not-so-mellow-Marin punk scene, playing shows with other Marin bands like The Pukes, Ludoviko Teknique, and Complete Disorder. Now that it is 1984 all over again, they have come out of retirement to play shows and mock everything politically sacred. Their self-released 7 song EP, Peace: Under Our Supervision, is available on Bandcamp.com.  The members of Sacripolitical are: John Marmysz (vocals and a philosophy professor at College of Marin), Matt Schmidt (guitar), Mark Wallace (bass), and Gary Benson (drums). Their hometown is San Rafael.

$10 – Available on Eventbrite or at the door