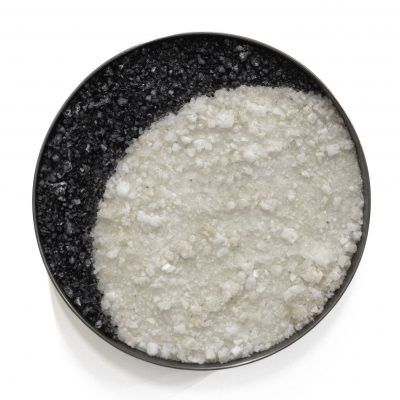 Salt Moon is a series of new artworks created with sea salt from the San Francisco Bay. For almost ten years Reichert has explored salt as both a medium of modernist formal abstraction and a material that is witness to the serious environmental consequences of industrial activity throughout the history of the San Francisco Bay.

For Salt Moon, Reichert draws on the formal visual language of the moon and its phases. The work connects the feminine energy of the moon and the healing powers of salt circles that have been used in rituals for centuries.

Reichert considers salt a material memory: a marker of her environment at a specific time. As the tide brings the Bay’s water to the shore, the moon pulls the water out to the sea. The sun’s heat evaporates remaining shallow waters, leaving salt behind.

Embedded on the surface of Reichert’s works are salt crystals harvested from the Bay. The crystals invite and reward the viewer’s close observation with subtle color and texture.

In some works Reichert adds specific material to the salt to change its color – cinnabar red and carbon black. In the 1800’s cinnabar was extensively mined (cinnabar when heated becomes mercury, a necessary element for gold mining), leaching toxins into the Bay. Carbon black is derived from ash of redwood trees burnt in the recent wildfires that were exacerbated by the climate crisis.

Reichert places the salt within steel frames, which over time intentionally stain the salt with rust color. The poetry of entropic processes such as corrosion and decay engenders an emotional understanding of complex traumas associated with progress. 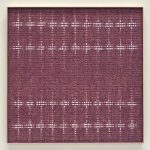