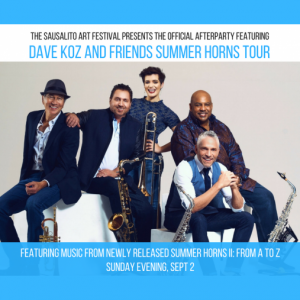 Dave Koz has assembled a powerhouse lineup of Brass Instrumentation for the Summer Horns Tour of 2018.

Following consistently successful Summer Horns Tours, this year’s tour will have the same high-energy hits, including songs from the new album Dave Koz and Friends Summer Horns II: From A to Z.  The first Summer Horns release debuted at No. 1 on Billboard’s Current Contemporary Jazz Albums chart.

Hailed by The New York Times as “a musician of unflappable rhythmic aplomb, which he happily squares against the airtight funk of his band,” Koz will be joined by Special Guests: Gerald Albright, Rick Braun, Richard Elliot and introducing Aubrey Logan.

This exclusive nighttime concert will immediately follow the Festival’s second day on the Sausalito waterfront over Labor Day weekend at 7:30 in the evening (doors open at 6:30):

Tickets are available online for $69-$99

If not sold out, tickets will be available Labor Day weekend at the Sausalito Art Festival