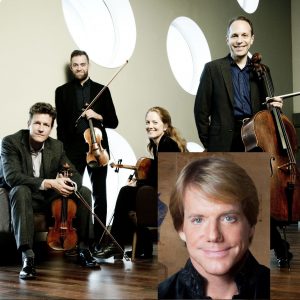 They established an ongoing residency at Spoleto Festival USA, made prize-winning recordings for EMI of music by Schumann, Tchaikovsky, and Golijov, earning two Grammy nominations and a host of other prizes before being appointed ensemble-in-residence at Stanford University in 1999 where today they remain at the forefront of intellectual life on campus.

Three time Grammy-nominated clarinetist Todd Palmer has appeared as soloist, recitalist, chamber music collaborator, educator, arranger, and presenter in a variety of musical endeavors around the world. He has collaborated with many of the world’s finest string ensembles and has also shared the stage with sopranos Kathleen Battle, Renée Fleming, Elizabeth Futral, Heidi Grant Murphy, and Dawn Upshaw, as well as many notable instrumentalists.

Jonathan Berger is an American composer whose symphonic, chamber, vocal, and electroacoustic works are performed throughout the world. Thrice commissioned by The National Endowment for the Arts, Berger has also received major commissions from the Mellon and Rockefeller foundations, Chamber Music America, and numerous chamber music societies and ensembles. The winner of the 2016 Rome Prize and the 2016 Guggenheim Fellowship, Berger is the Denning Family Provostial Professor in Music at Stanford University.

Immediately after the concert the audience is invited to stay for a reception to meet Jonathan Berger and the performers.

Immediately after the concert the audience is invited to stay for a reception with refreshments to meet Jonathan Berger and the performers. This reception will conclude at 8:00 pm.