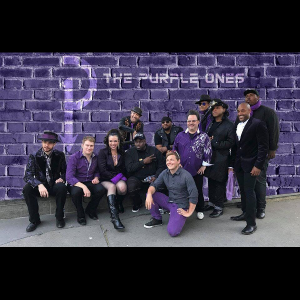 Oakland California’s The Purple Ones treat the music and patented vibe of Prince’s legacy with the utmost respect.

The musical dexterity of The Purple Ones – with 12 pieces on stage including a full horn section – delivers their own spin on Prince’s live onstage in a way that has to be experienced to be believed.

(Also other Prince related artists such as The Revolution, The New Power Generation, Sheila E., Morris Day & The Time and the general Minneapolis Sound.)

The Purple Ones is a group of world-class musicians that carries out the Purple Legacy of the MUSIC. TPO is NOT a typical tribute band. There is no impersonator or look-a-like, nor do they dress up in goofy costumes or wigs.

The Purple Ones’ Musical Director is Prince’s former Musical Director, bassist/guitarist and co-founder of Prince’s “New Power Generation,” Levi Seacer Jr. Levi was with Prince for many years and is the only Prince band member to have played multiple instruments. Later, collaborating with Prince as a songwriter and Co-Producer on his projects.

Now the lead guitarist and Musical Director of The Purple Ones, Seacer is determined to continue the musical legacy of his late friend and former band mate. He says one of the biggest keys to the authenticity is the ‘controlled chaos” that existed in Prince’s world that allowed for extreme creativity, “With Prince,” Levi says, “you tried everything. That’s the biggest thing I learned from him over all those years. If it doesn’t work you can always take it out, but if it does work…there’s no limit.”