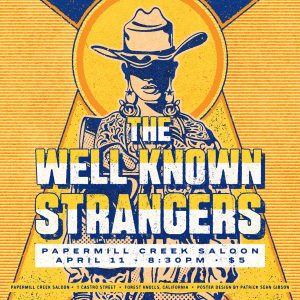 Spring has sprung in Marin and The Well Known Strangers are celebrating with a spate of local shows, including three gigs in their favorite west Marin haunts in as many weeks – Iron Springs Brewery, Rancho Nicasio, and finally, the Papermill Creek Saloon.

Fresh off a successful winter run and the buzz of their new album TMI, The Well Known Strangers have been entertaining audiences with their celebrated style of California Country Soul.

The new album TMI is available on a variety of streaming services.  Vinyl and CD copies of the new album will be available at the shows.