Why There Are Words: So You Think You Can Tell 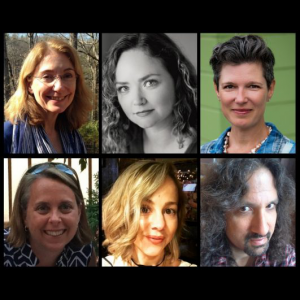 A remarkable night of readings on the theme “So You Think You Can Tell”!

Think and tell with Why There Are Words on July 11, 2019, at Studio 333 in Sausalito for a remarkable night of readings from six acclaimed authors on the theme of “So You Think You Can Tell.”

Robin Behn’s books of poetry include Paper Bird (AWP Award Series), The Red Hour, Horizon Note (Brittingham Prize), The Yellow House, and, just out from Plume Editions, Quarry Cross. She is co-editor of The Practice of Poetry: Writing Exercises from Poets Who Teach, and editor of a new volume for young writers, Once Upon a Time in the Twenty-first Century: Unexpected Exercises in Creative Writing. She teaches in the MFA in Creative Writing Program at The University of Alabama, and received grants from the Guggenheim Foundation and NEA. Robin is also a musician, and combines music and poetry at her readings.

Heather June Gibbons is the author of the poetry collection Her Mouth as Souvenir, winner of the 2017 Agha Shahid Ali Poetry Prize from the University of Utah Press. She is also the author of two chapbooks, Sore Songs and Flyover, and her poems have appeared widely in literary journals. A graduate of the Iowa Writers’ Workshop, she teaches creative writing at San Francisco State University and elsewhere in the community.

Meredith May is an award-winning journalist and fifth-generation beekeeper. She spent sixteen years at the San Francisco Chronicle, where her narrative reporting won the PEN USA Literary Award for Journalism and was shortlisted for the Pulitzer Prize. She is co-author of I, Who Did Not Die, about a child soldier who risked his life to rescue a wounded enemy fighter during the Iran-Iraq War. Her new memoir, The Honey Bus (Harper Collins / Park Row Books, 2019), reveals the life lessons she learned in her grandfather’s Big Sur bee yard that rescued her from a difficult childhood.

Cynthia Phoel is the author of Cold Snap: Bulgaria Stories (Southern Methodist University Press, 2010) and is nearing completion of her new novel. Her work has appeared in The Missouri Review, The Gettysburg Review, Harvard Review, and other publications. She holds degrees from Cornell University and the Warren Wilson MFA Program for Writers, and lives in Arlington, VA, with her husband and three children.

Tanya Rey was born and raised in Miami, Florida. Her writing has appeared in Guernica, Granta, The Morning News, Roads & Kingdoms, McSweeney’s Internet Tendency, and Catapult,among others. She holds an MFA degree in fiction from New York University, and has worked as managing editor for One Story and fiction editor for Epiphany. Tanya has received fellowships from the Anderson Center, Blue Mountain Center, Hambidge Center for the Arts, Hedgebrook, Kimmel Harding Nelson Center for the Arts, Rona Jaffe Foundation, San Francisco Writers Grotto, and UCross Foundation. Her manuscript, Refuge, was selected as a 2016 semi-finalist for the James Jones First Novel Fellowship.

Gary Singh has published over 1100 works, including travel essays, art and music stories, profiles, features, business journalism, lifestyle articles, poetry, and short fiction. For 14 years, his newspaper columns have appeared in Metro Silicon Valley. He is the author of The San Jose Earthquakes: A Seismic Soccer Legacy (2015, The History Press) and was recently a Steinbeck Fellow in Creative Writing at San Jose State University.

Why There Are Words (#WTAW) is an award-winning national reading series founded in Sausalito in 2010 by Peg Alford Pursell, now expanded to seven additional cities in the U.S. The series draws a full house of Bay Area residents every second Thursday to Studio 333, located at 333 Caledonia Street, Sausalito, CA 94965. The series is a program of WTAW Press, a 501(c)(3) publisher of exceptional literary books.