Why There Are Words: Somewhere Else 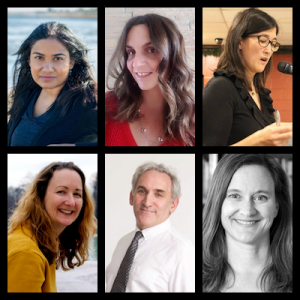 Six acclaimed authors will take us to places both familiar and distant, as they read from their works on the theme of “Somewhere Else.”

There’s no better place to be than with Why There Are Words on February 14, at Studio 333. Six acclaimed authors will take us to places both familiar and distant, as they read from their works on the theme of “Somewhere Else.”

Anita Felicelli is the author of the short story collection Love Songs for a Lost Continent (Stillhouse Press, October 2018), which won the 2016 Mary Roberts Rinehart Award.

Ksenia Lakovic is a Serbian-born writer, living in the San Francisco Bay Area. Her work has appeared in The Globe and Mail, The Millions, and elsewhere. She recently completed her first novel, based on her memories of the Yugoslav wars of the 1990s and their aftermath.

Julayne Lee is an overseas-adopted Korean American poet, essayist, artivist, art curator, and producer. Her debut collection of poems Not My White Savior (Rare Bird, March 2018) was included in the 2018 Poets House Showcase in New York for their 26th annual exhibition.

Micah Perks is the author of the collection of linked stories True Love and Other Dreams of Miraculous Escape (Outpost19, October 2018) and the novel What Becomes Us (Outpost19, 2016). Her memoir Pagan Time (Counterpoint, 2012) tells the story of her childhood in a log cabin on a commune in the Adirondack wilderness.

Robert Rorke was born and raised and lives in Brooklyn. Car Trouble (Harper Perennial, September 2018) is his uncommonly warm coming of age debut novel, set in 1970s Brooklyn. He is a TV editor at the New York Post.

Why There Are Words (WTAW) is an award-winning national reading series founded in Sausalito in 2010 by Peg Alford Pursell, now expanded to seven additional major cities in the U.S. The series draws a full house of Bay Area residents every second Thursday to Studio 333. The series is a program of the 501(c)3 non-profit WTAW Press.