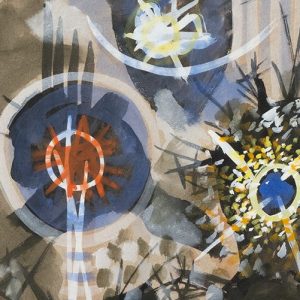 One of the major influences in the 1950s on Bay Area art and culture was Zen Buddhism and its connection with the newly established American Academy of Asian Studies in San Francisco.

The art practice of Gordon Onslow Ford aboard the S.S. Vallejo became primarily focused on his study and exploration of Asian philosophy, which forever altered his art and way of life.

Perhaps one of his greatest influences was Japanese calligraphy master Sabro Hasegawa, who he was introduced to by Alan Watts.

What proceeded thereafter was a creation of a cohort of artist friends who studied Japanese calligraphy with Hodo Tobase Roshi, such as Ruth Asawa, Adaline Kent, and others.

Fariba Bogzaran, PhD, is the founding director of the Lucid Art Foundation in Inverness and author/editor of the newly released book, “Gordon Onslow Ford: A Man on a Green Island.” The book will be available for preorder.