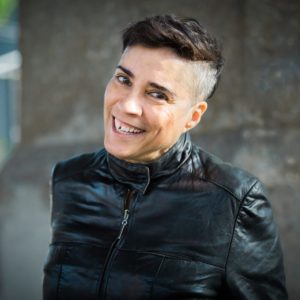 The show features comedians Marga Gomez, Dhaya Lakshminarayanan, Chey Bell and Matt Gubser. Come get in on the fun!

MARGA GOMEZ (winner of  the 2018 “Best Comedian” award by the San Francisco Bay Guardian/ 48 Hills)  has appeared on LOGO’s “One Night Stand Up,” Showtime’s “Latino Laugh Festival,” Comedy Central’s “Out There” and HBO’s “Comic Relief” at the invitation of Robin Williams who called her “Amazing… a lesbian Lenny Bruce.” She has been a guest on leading comedy podcasts and featured at numerous comedy festivals.

DHAYA LAKSHMINARAYANAN is the 2016 winner of the Liz Carpenter Political Humor Award (previously awarded to Samantha Bee, Wanda Sykes and satirist/humorist Mark Russell) presented by the National Women’s Political Caucus. KQED named her one of the twenty “Women to Watch” a series celebrating women artists, creatives and makers in the San Francisco Bay Area who are pushing boundaries in 2016. The SF Weekly named her one of the “16 Bay Area performers to watch in 2016.”

MATT GUBSER performs across the country and internationally, touching on topics like  fatherhood, dating, sex, politics, and religion, intermingling personal anecdotes and biting social commentary, all couched in a comfortable, relaxed delivery.  Matt was named “Comedian’s Comedian” in the 2014 Bay Area Stand Up Comedy Awards.